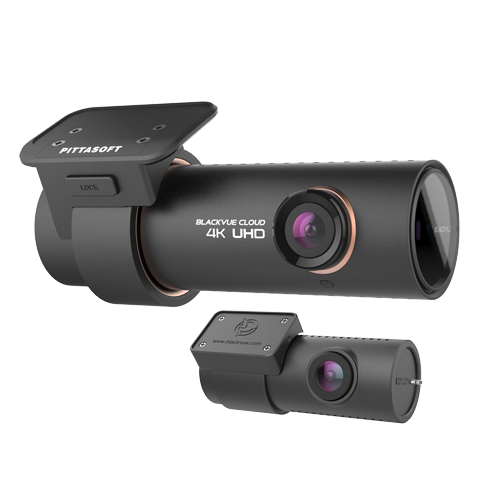 Unsure which SD card option to go for?

Based on 4K UHD @ 30 fps + Full HD @ 30fps you can expect the following recording times on the following sizes of sd card packages:

BlackVue is recognised as a global leader and innovator in the field of in-car video technology and puts image quality and next-generation functionality at the forefront of its product development philosophy. The introduction of 4K UHD recording resolution and

Cloud-connectivity is a game-changing moment in the evolution of the dash cam.

Along with 4K recording, the DR900S Series features HEVC compression, dual-band 2.4-5GHz Wi-Fi and BlackVue Over the Cloud connectivity, making it the ultimate car camera for protection when driving or while parked.

The 4K Ultra High Definition resolution contains exactly four times as many pixels as Full HD, 3840 pixels Å~  2160 lines to be exact, equivalent to 8.3 million pixels. For a dashboard camera, this can mean the diff erence between an unusable pixelated blur and a readable licence plate, especially at speed or in low light conditions. To take even greater advantage of the extra resolution, the DR900S Series packs a massive ultra-wide 162 degree lens for incredible clarity and detail from edge-to-edge.

The Blackvue DR900S 2CH performs exceptionally well at night and in dark environments, while maintaining a low level of noise. In daylight, the ability to “freeze” the action is nothing short of spectacular – thanks to a high shutter speed, so users can clearly see the details of vehicles even in adjacent lanes at the edges of the screen.

When handling 4K footage, storage space is always going to be a primary concern, fortunately the DR900S Series incorporates the best in video compression technology: HEVC (High Efficiency Video Coding), also referred to as H.265, is the leading standard in broadcasting and streaming of 4K video content. This major advance allows the Blackvue DR900S 1CH Series to store as much 4K footage on a 16GB microSD card as a standard Full HD dash cam would, thus avoiding the needless expense of purchasing additional high capacity memory cards.

But it’s not only about the quality and resolution of the image, the DR900S range features GPS logging, Wi-Fi, Cloud connectivity and impact and motion detection – all in a premium quality, discreet and compact design that is BlackVue’s signature. BlackVue’s unique appdriven Over The Cloud platform is an industry first, a suite of realtime features that let you connect to the Blackvue DR900S 1CH anytime, from anywhere in the world. Enjoy remote Live View and Push Notifications to your phone. Back-up important videos to the free Cloud storage. Play and download videos from your dash cam’s memory or the Cloud from anywhere.

Enjoy Two-way Voice Communication with the driver via the BlackVue app through the BlackVue’s integrated speaker and mic. Whether you are driving or away from your vehicle in parking mode, you can rest assured that your BlackVue DR900S will capture all the critical details.

As one of the first manufacturers to incorporate Wi-Fi into dash cams, BlackVue innovates once more with the inclusion of an 802.11n 2.4GHz / 802.11ac 5GHz dual-band Wi-Fi module. For smartphones and tablets supporting the 802.11ac 5GHz Wi-Fi standard, transfer speeds can be up to three times faster than with 2.4GHz. BlackVue have also developed a new feature called Sub-Stream, which saves small-sized versions of videos in

parallel to the full-sized ones. The sub-streams can be downloaded in record time or used for quick preview when browsing the dash cam’s videos via the BlackVue App. These enhancements benefit the user.

The 4K Ultra High Definition resolution contains exactly four times as many pixels as Full HD, 3840 pixels × 2160 lines to be exact, equivalent to 8.3 million pixels. For a dashboard camera, this can mean the difference between an unusable pixelated blur and a readable licence plate, especially at speed or in low light conditions, but this can depend on the type of vehicle head lights as well as weather conditions on how this will show on the video recording.

BlackVue Over the Cloud combines state-of-the-art dashcam technology with a suite of innovative ‘connected’ features that take the BlackVue user experience to new levels. Over the Cloud unlocks the true potential of your dashcam, remotely connecting you with your vehicle and providing additional functionality including Live View, Video Backup, Realtime Tracking and Emergency Alarms.

SUPPORT MICROSD™ CARD UP TO 256GB

DR900S-2CH ships with a 16GB microSD™ card but supports cards of up to 256GB, allowing the user increased recording time if required.

Developed by BlackVue, this file system improves recording stability and reduces the need for microSD card formatting, while also giving you the flexibility to change recording time duration (1/2/3 minutes) and image quality setting.

Dashcams record in a loop, overwriting older files when the microSD™ card memory is full. The DR900S-2CH can prevent Event files (triggered manually or by impacts) being overwritten. Up to 50 files can be protected in this way. By choosing to allow new Event files to overwrite old Event files, you will always keep the latest 50 clips.

While driving, your BlackVue will detect impacts and sudden changes in speed. While parked, it also detects movements. Video files are marked accordingly so that you can easily find the relevant ones in the BlackVue Viewer for Windows and Mac OS, or via the BlackVue App for iOS and Android.

Normal, Event and Parking modes are activated through the built-in G-Sensor.

“TTW have been supplying Blackvue Dash cameras since 2010, we can offer you the full range and support of all its models and accessories. We are an established business since 2003 offering you the customer the best buying experience”.

We offer full installation services to correctly install your Blackvue dash camera into any vehicle the correct way. Please see some of our installs here: